The Role of Temperature on Heavy Organics Deposition from Petroleum Fluids

The wax present in petroleum crudes primarily consists of paraffin hydrocarbons (C18 - C36) known as paraffin wax and naphthenic hydrocarbons (C30 - C60). Hydrocarbon components of wax can exist in various states of matter (gas, liquid o r solid) depending on their temperature and pressure. When the wax freezes it forms crystals. the crystals formed of paraffin wax are known as macrocrystalline wax. Those formed from naphthenes are known as microcrystalline wax

A hydrocarbon in pure state has definite boiling and freezing (or melting) points which can be measured in the laboratory. Knowing the intermolecular energy parameters or critical properties and acentric factor and/or refractive index of hydrocarbons o ne can predict their boiling point using vapor pressure correlations or such equations of state as vdW, RK, MMM, BWRS, etc. with various degrees of accuracy. However, such methods are not capable of predicting pure hydrocarbon freezing points. There ar e other methods which can be used to predict hydrocarbon and wax freezing (melting) point which include but not limited to: i. Variational statistical mechanical theory. ii. Density functional theory. iii. Dislocation theory.

A Waxy crude usually consists of: i. A variety of light and intermediate hydrocarbons (paraffins, aromatics, naphthenic, etc.). ii. Wax as defined above. iii. A variety of other heavy organic (non-hydrocarbon) compounds, even though at very low conc entrations including resins, asphaltenes, diamondoids, mercaptdans, organo- metallics, etc. When the temperature of a waxy crude oil is lowered, first the heavier fractions of its wax content start to freeze out. For a waxy crude it is customary to measure its cloud point and pour point according to ASTM methods.

Pipeline Plugging due to Wax Deposition

A. A Clean Waxy Crude: A clean waxy crude is defined as a crude oil in which there exist only hydrocarbons and wax as its only heavy organic constituent. As the clean waxy crude flows through a cold pipe or conduit (with a wall tempera ture below the cloud point of the crude) crystals of wax may be formed on the wall. Wax crystals could then grow in size until the whole inner wall is covered with the possibility of encapsulating oil inside the wax layers. As the wax thickness increa ses, pressure drop across the pipe needs to be increased to maintain a constant flow rate. As a result, the power requirement for the crude transport will increase. The arterial blockage problems of clean waxy crude can be efficiently controlled by insu lation and heating of the pipe to a temperature above its cloud point.

Most of the existing wax deposition problems of the clean waxy crudes are due to the lack of proper insulation and heating systems. As a result application of chemical anti-foulants and frequent use of pigging operation have become necessary.

B. Regular waxy crude: Regular paraffinic or waxy crudes are widespread in the world and the major complex systems problems related to the production, processing, and transportation of these medium-gravity fluids is not just crystallization of their wax content at low temperatures, but the formation of deposits which do not disappear upon heating and will not be completely removed by pigging. 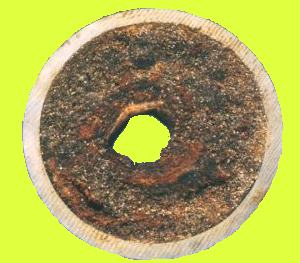 Depending on their natures, these other heavy organics will have different interactions with wax which could either prevent wax crystal formation or enhance it. In order to prevent arterial blockage and facilitate the production of regular waxy crudes many issues which include the following must be undertaken: i. Detailed fluid properties characterization, ii. Production scheme alternatives, iii. Retrograde condensation and deposition behavior prediction, iv. Onsets of deposition studies, v. Equipment and facility options, vi. Design and use of chemical anti-foulants and / or pour-point depressants and blending alternatives. vii. Performance specification and maintenance planning, viii. Transportation, storage, and blending studies.

We have developed a number of predictive software which are designed to predict solid deposit formation. Our ongoing research and development activity is aimed at the better understanding and quantification of the cause and effect of heavy organics deposition from petroleum fluids.

"A simple cubic equation of state for hydrocarbons and other compounds", SPE paper No. 26667, M. Mohsen-Nia, H. Modarress and G.A. Mansoori, Proceedings of the 1993 Annual SPE Meeting,, Society of Petroleum Engineers, Richardson, TX.

"A new accurate and simple equation of state for hydrocarbons and other compounds", M. Mohsen-Nia, H. Moddaress and G.A. Mansoori", Proceedings of the International Conference on Fluid and Thermal Energy Conversion '94, Vol. I, pp. 151-156, 1994.